Did you know that since 1995 Mumbai is the official name of Bombay?

A week with the Bene Ephraim of Andra Pradesh 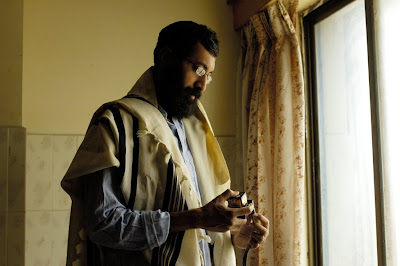 Last week we followed one of our main characters, Sharon Galsulkar, on his journey to meet with the Bene Ephraim community, settled for generations in the central state of Andra Pradesh.

Last summer, the American organization Kulanu sent a rabbi and his wife (Bonita and Gerald Sussman) to visit the Bene Ephraim. They met Sharon on their way back as they were stopping in Bombay, and told him about this community, lost in the plains of the Deccan. For Kulanu, finding out about an Indian Jewish educator, fully qualified and living a few hours away from the Bene Ephraim, was a great opportunity. He agreed to go on their behalf, they paid his trip. His mission was to develop the contact with the community and try to understand better their socio-economic needs on one hand, spiritual and religious ones on another hand. On our side, we wanted to follow this Bene Israel educator going to help a community reconnecting with their Judaism, a process through which his own community underwent. The challenge for us was to not be swallowed by the interesting story of the Bene Ephraim but rather focusing on Sharon’s approach to the situation.

Sharon, 33, is married to Sharona, the mother of his two young daughters. He is in charge of the Jewish Education department at O.R.T. India, which agenda is to provide professional training to needy Jews. He had the same kind of job at A.J.D.C., the other American Jewish organization holding office in Bombay. He also gave Torah classes in several synagogues in the city. Sharon enjoys a special authority in the community as he is one of the very few Bene Israel who studied in a yeshiva (Talmudic class) in Jerusalem and came back to India afterwards. He and his wife follow orthodox customs, making it often uneasy to lead an integrated life in Bombay. They want to do Aliyah to Israel, where their daughters will have the chance to receive a proper Jewish education. But Sharon is strongly attached to his city and country, developing a true passion for the fantastic Indian wildlife. On another note, his professional perspectives in Israel are still uncertain.

The Bene Ephraim community counts around 30 families, and most of its members work in the surrounding fields of chili and cotton, or in the buffalo farms, which milk is used in the preparation of curd (plain yogurt) or lassi (sweet yogurt to drink). Sadok Yacobi, the leader of the community, his wife and three children, are the only English-speakers. In Andra Pradesh the main language is Telugu. None of the Bene Ephraim can speak Hindi, the Indian official language; Sharon had to communicate with them through Sadok or his daughter Kezia. 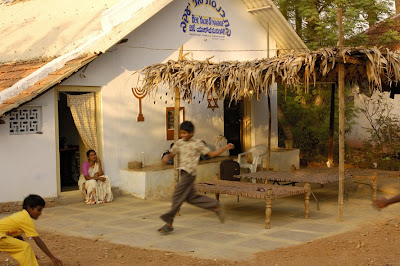 This community lives 30 Kms away from Guntur, a growing city, about which nothing could be said beside that it is located 300 Kms from Hyderabad, itself 700 Kms East of Bombay. Their village, Chebrole, is basically a bunch of cheap businesses along the main road, from which smaller tracks go towards the fields and farmers’ houses. While commercial and residential constructions are common and a bit ugly, the landscape is gorgeous, offering to the spectator a great variety of greens, yellows and oranges. Animals, vegetation and women’s multicolor saris animate this relaxing décor. 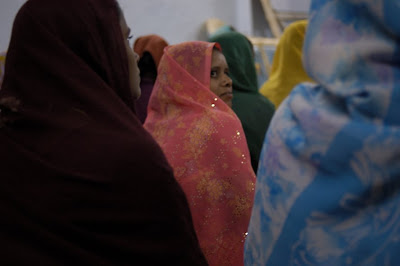 As for Jewishness, the Bene Ephraim would be Jews settled in the Telugu region for generations. Like Bene Israel, they would have lost almost all the Jewish rituals, but not the belief in their belonging to a people whose origin is not in India. It seems that for a while they followed Christian customs, without forgetting their roots. For instance, they would have always circumcised their first-borns and would have always eaten beef, which is a great sacrilege in a Hindu country. For several generations they have been put apart of the majority and have lived side by side with the untouchables. Last but not least, they don’t work on Saturdays, although most of them are very poor farmers. Their Jewish rebirth seems to have started by Sadok’s grandfather onward.

We stayed at Sadok’s house, renovated in 1991 thanks to American funds, and which is also used as the community synagogue. Every evening Sharon met with the kids, aged 5 to 15, and taught them basic elements of Judaism through drawing, singing but also bird watching. At 8 pm adults came to listen to lectures about monotheism, the Jewish mitzvot (prescriptions) or the Jewish calendar. 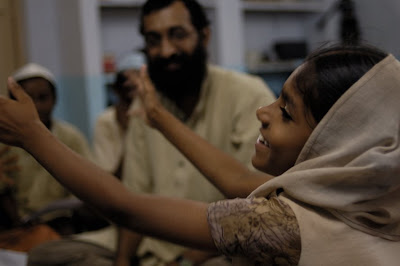 It would have taken more than six days for Sharon to really understand the community’s needs, and even more to start figuring out solutions. However, during an interview on camera he declared that the ideal solution would be to send the whole community to Israel. It is definitely far from happening as their Jewishness is not recognized by the Hebrew State. But more importantly, one can doubt about the chances of social promotion for Telugu-speaking farmers.

On a personal note, this trip was unforgettable. We were welcomed with great hospitality and generosity. Sadok’s family treated us as if we were part of them, cooking breakfast, lunch and diner for us – and the several chai (tea) it takes to spend a normal day in India. Still, these people are far from being wealthy. Listening to their Shema Israel resonating and reaching heaven was another illustration of their sincere and hopeful faith, leaving us moved and speechless.

Posted by Jonas Pariente at 5:27 PM